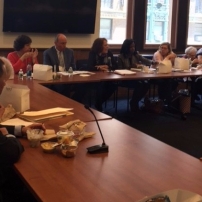 On May 9th, the Campaign for Educational Equity (CEE) in collaboration with the Center for Children’s Initiatives (CCI) and the Schuyler Center for Analysis and Advocacy hosted a forum with participants who are leading the charge for universal pre-K for all children in New York State. This forum debuted the working draft of a white paper, Establishing Universal Access to Prekindergarten as a Constitutional Right, coauthored by CEE and CCI. The paper makes the legal argument for the constitutional right to universal access to pre-K, and advances New York State as the best venue for litigation to affirm that right.

More than 50 national, state, and local policy experts, researchers, advocates, and educators from early childhood and public schools attended the forum to discuss the future of universal pre-K in New York. The significance of this conversation is especially heightened now, as the fourth year of the state’s five-year funding commitment approaches, with no firmly established plan to ensure adequate, stable, sustained, and equitable funding for pre-K going forward.

In the morning session, Michael Rebell, executive director of CEE, set forth the case for making preschool education a fundamental part of the free public education to which all children are entitled, laying out persuasive evidence on the benefits of universal access to pre-K as the foundation tier of public education and the legal precedents for establishing the right. Steve Barnett, executive director of the National Institute for Early Education Research, and Jay Worona, deputy executive director and general counsel for the New York State School Boards Association, offered insightful comments on how our strategy will serve to stabilize funding and quality of pre-K throughout the state and also addressed the challenges and potential reactions of district superintendents to this additional requirement.

Their remarks were followed by additional important feedback on the strategy from other national, state, and local researchers, advocates, and educators. Many participants’ responses expressed excitement at the potential of establishing pre-K as a constitutional right even as they raised pragmatic questions on implementation. Zoila Morell of Mercy College and Kim Sweet of Advocates for Children of New York (AFC) shared their expertise and insight into the needs of multilingual learners as well as preschoolers with special needs. Christine Johnson-Staub of the Center for Law and Social Policy (CLASP) in Washington, D.C., described the potential advantages– as well as the challenges – that expansion of pre-K offers in building a continuum of early childhood services that includes children from birth to three.

The afternoon session took stock of the pre-K landscape in New York State and discussed necessary next steps to make quality pre-K integral to educational opportunity and to assure it is a building block for an early care and learning system. Betty Holcomb, CCI’s policy director, set the stage with a summary of the current state of pre-K in New York. Kate Breslin of the Schuyler Center for Analysis and Advocacy, Jasmine Gripper of the Alliance for Quality Education, Brigit Hurley of The Children’s Agenda, and Randi Levine of AFC shared their policy and strategic expertise on the subject. Representatives from the Long Island Pre-K Initiative presented a vision for regional coordination to support both implementation and advocacy to make pre-K truly universal.

Overall, participants’ support for the value of a rights-based approach to pre-K affirms the importance of this transformative strategy. CEE and CCI plan to finalize our working draft over the summer and release it in the fall, at a second convening with state leaders in Albany.