An extensive study of collective impact, community schools, and other comprehensive educational opportunity initiatives in eight cities concludes they are a calming force and “show promise.”

For the past four years, CEE Executive Director Michael A. Rebell and Policy and Research Director Jessica R. Wolff, together with two faculty colleagues at Teachers College, Carolyn J. Riehl and Jeffery R. Henig, have been working on a major study of broad, multi-sector collaborations for education that can involve government, schools, business, universities, foundations and nonprofits. The final report of this important project, which was supported by The Wallace Foundation, has now been released. 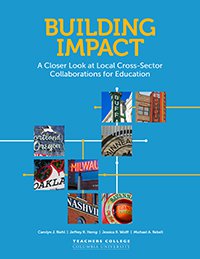 In addition to the full report, the authors have prepared an executive summary and a longer overview of the study and discussion of key findings.

While collaborations of this kind have existed for more than 100 years, collective impact has in recent years attracted attention nationwide as communities try to tackle problems that are too complex for any one institution to solve on its own. Despite the growing interest, however, there has been little research on contemporary forms of cross-sector collaboration.

Although they face a number of challenges, “current collaborations show promise for creating a new kind of venue to bring local partners together who often have not cooperated in the past and have even been in conflict,” the authors say. “Importantly, most of the collaborations we studied seem to have helped calm often-contentious urban education politics and establish enough stability for partners to move forward.”

The report is the third and final in a series, presenting findings from comparative case studies of eight such initiatives across the country. Between 2015 and 2017, researchers took an in-depth look at three collaborations—All Hands Raised in Multnomah County, OR; Milwaukee Succeeds; and Say Yes Buffalo—and a more limited look at five others (Alignment Nashville, Chatham-Savannah Youth Futures Authority, Northside Achievement Zone in Minneapolis, Oakland Community Schools, and Providence Children and Youth Cabinet). They visited each city one or more times to observe meetings and other activities and interview participants and stakeholders.

The report takes a comprehensive look at the components of collective impact, from funding to data use to strategic relationships. Among the many findings are the following:

The Center for Educational Equity was an early leader of work on cross-sector collaborations to provide comprehensive educational opportunity; our writing and teaching in this area began over ten years ago. Some of our contributions including history, theory, and legal research, can be found here.