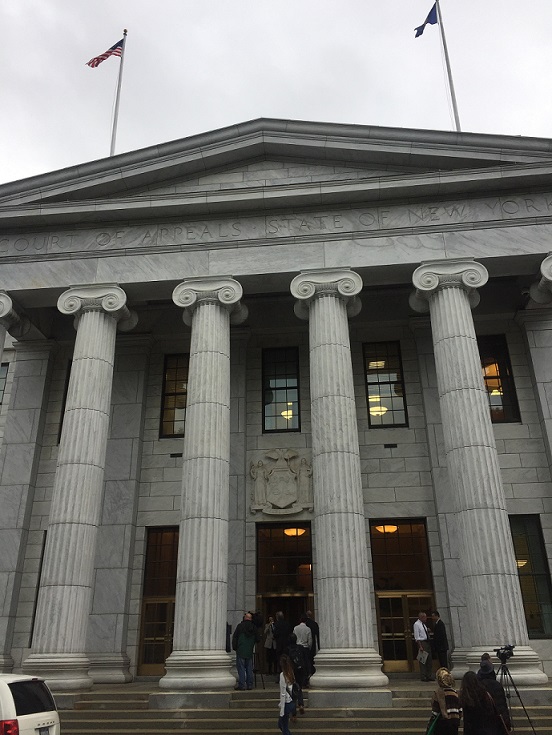 On May 30th, the Campaign for Educational Equity hosted a group of parent and student partners on a trip to Albany to hear oral arguments for New Yorkers for Students’ Educational Rights (NYSER) v. State of New York at the Court of Appeals, New York State’s highest court.

NYSER v. State is a lawsuit that was filed in February 2014—against the State of New York, Governor Andrew Cuomo, and state education officials—on behalf of New York’s public school students. The plaintiffs include several families from across New York State, as well as New Yorkers for Students’ Educational Rights (NYSER), a statewide coalition of stakeholder groups that formed to bring the lawsuit. The plaintiffs charge that the state is violating students’ educational rights by neglecting its constitutional obligation to ensure that every school has sufficient funding to provide all students with meaningful educational opportunity.

The May 30th hearing was scheduled after the state appealed a lower court’s ruling against its motion to dismiss the plaintiffs’ charges. The state argues that it does not owe schools additional funding; that it does not have a constitutional obligation to change the way it distributes school funding (its foundation aid formula); and that the plaintiffs’ claims not apply to all of the state’s 700-plus districts, but only to New York City and Syracuse.

The lawyers for the plaintiffs articulated the importance of applying their claims to the entire state, the amount of money still owed based on the 2006 CFE ruling, and the obligation to reassess the education-funding formula so that all schools receive adequate funding to provide a meaningful education to all students. The NYSER case is the first case on behalf of all underfunded school districts in New York State rather than limited to certain school districts.

The Court of Appeals’ decision on the lower court’s ruling against the state’s motion to dismiss is expected in late June or early July.

Following the hearing, Chief Judge DiFiore joined our youth and parent collaborators as well as a student group from Yonkers High School to discuss the role of the Court of Appeals in a broader civic context. Although protocol prohibited the chief judge from discussing the NYSER case in that particular setting, the opportunity for our partners to witness the oral arguments and speak with the chief judge enhanced their understanding of education law, how the legal system interacts with policy and political systems, and how parents, students, and other stakeholders can use civic skills to influence the decision-making process.

NYSER is one of many groups that has made use of the Campaign for Educational Equity’s school-based research, legal analysis, and policy development regarding resource inequities affecting New York schools. Interested in learning more about our collaborative efforts to define and secure the full range of resources, supports, and services necessary to guarantee all children, particularly children in poverty and children of color, a meaningful education? Visit the Focus Areas section of our website: http://www.equitycampaign.org/areas-of-focus.